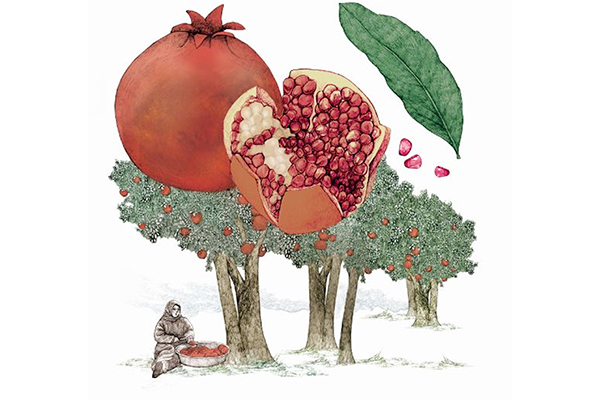 Trees are one of humanity’s most constant and most varied companions. From India’s sacred banyan tree to the fragrant cedar of Lebanon, they offer us sanctuary and inspiration – not to mention the raw materials for everything from aspirin to maple syrup.

Jonathan Drori’s bestselling book, Around the World in 80 Trees, is now available in paperback. In this extract, we take a closer look at something local, the Jarrah, and then journey to Iran to hear about the origins of the pomegranate.

Jarrah: a name that sounds quintessentially Australian. The word comes from the Nyungar language of the continent’s far southwest. In pre-colonial times, there were millions of acres of jarrah forest on the leached soils of what is now called the Darling Plateau. It is a majestic tree, easily 40 metres (130 feet) high and its trunk 2 metres (6 feet) across, with rough, very dark-brown bark. Gloriously fragrant flowers, miniature white starbursts, festoon the tree in clusters of ten or so, attracting bees, which make a distinctively malty, caramel-flavoured honey from its nectar. Jarrah is the linchpin of an important and complex forest ecosystem, home to unspeakably cute marsupials with names to delight any Scrabble player: the numbat, the potoroo, the quoll and the quenda.

Jarrah trees are long-lived – at least 500 years and up to a millennium or more – if they get the chance. British colonists quickly saw the value in the rich red jarrah wood, which was immensely strong and resistant to rot, insects, wind and water. It was eagerly taken up for shipbuilding and harbour pilings. When convicts arrived en masse from 1850, the fl ood of cheap labour meant that jarrah could be exported across the British Empire to feed its insatiable appetite for railway sleepers and other durable infrastructure such as telegraph poles, wharves and even tea sheds. A network of steam-powered sawmills and railways sprang up to extract the timber.

On the other side of the world, Londoners were trying to work out
what to use to pave their roads, which by the 1880s were hectic with horsedrawn traffic. Stone blocks and cobblestones were deployed on substantial sections of main roads, but they were expensive and caused horses to slip and skitter in the city’s frequent rain. Tarmac, known then as macadam, would still need another few decades of development before it was robust enough. Then there was wood. Softwood deal and pine paving from the Baltic had advantages over stone: it was much quieter, more easily swept and kinder to horses’ hooves. But those woods wore and rotted quickly, and would soak up the swill of equine urine and ordure and, under pressure from a heavy wheel, squirt it out at passers-by. Unsurprisingly, then, when jarrah wood was exhibited in 1886 at the Indian and Colonial Exhibition in London and advertised as a durable paving material, there was immediate interest. It turned out to be extraordinarily hardwearing, losing only 3 millimetres (1∕8 inch) a year on busy roads. Lasting decades and blessedly non-porous, it was popular with man and beast alike. By 1897, despite the huge shipping costs and distance, some 30 kilometres (20 miles) of London’s busiest and swankiest streets had been clad in Australian jarrah wood – millions and millions of blocks, mostly laid over concrete. Back in Australia, the huge demand spawned many competing and unregulated jarrah-wood companies. Competitors repeatedly dropped their prices to gain orders, to the point that in 1900 Australian jarrah was being sold in England for less than vastly inferior woods brought from nearby Sweden. It was a lucrative but ludicrously unsustainable business; the forests could never withstand such rapacious exploitation. Despite the rapid forest loss, it wasn’t until the end of World War I that laws were introduced to manage more sensibly the trees that remained. And while asphalt replaced wooden paving blocks soon afterwards, the demand for jarrah timber for construction work never went away.

Aside from a few spectacular protected areas, most of the jarrah forests are gone now, felled for timber or to make way for agriculture and mining. What is left is at risk from global warming and the cascade of complex changes that come with it. The fungus-like organism Phytophthora cinnamomi is causing deadly dieback, and in summer there are increasingly frequent droughts and heatwaves. The original unbridled exploitation of jarrah and the depletion of its fragile ecosystem coincided with the demise of Nyungar culture. The remaining jarrah is again in danger, this time from climate change, to which we all contribute and by which all cultures are threatened.

Pomegranates feature frequently in writings from ancient Egypt and classical Greece, in the Old Testament and Babylonian Talmud, and in the Qur’an. Their abundance of seeds and juice consistently link the fruit to fertility. The ancestors of the cultivated pomegranate grew several thousand years ago in arid, hilly regions between Iran and northern India, and today’s cultivars still prefer hot days and cool nights. Small, many-branched trees of 5–12 metres (16–40 feet), with shiny leaves of deep green, they are long-lived, perhaps to 200 years. Pomegranate flowers are a sight to behold. Distinctive calyxes, protective layers around the base of each flower, form sturdy funnels from which crumpled petals burst exuberantly in lurid shades of scarlet and crimson.

Pomegranate fruit range in colour from yellow with a blush of pink to burnished rose or even maroon. They have a tough, leathery skin, ensuring the fruit last well after picking; historically, they were a refreshment taken on long journeys. Inside, held within a spongy cream membrane, are hundreds of seeds, each within a juicy sarcotesta (a swollen seed coat), ranging from translucent pink to deep purple. The turgid grains interlock satisfyingly with one another – a triumph of efficient packing – and the juice within each one is delectably sweet, tart and mildly astringent. These are ample compensations for the dry woodiness of the seeds and the dilemma, for some, of whether to spit or swallow.

While fresh pomegranate fruit, juice and cordials are widely available from the western Mediterranean to south Asia, the Iranians have truly embraced pomegranate culture. Specialist stalls stock juice from different cultivars. Mounds of seeds – fresh, dried or frozen – are ready to be sprinkled on top of juice or ice cream, sometimes with a pinch of thyme. In autumn, fresh juice is boiled until it thickens into dark-brown molasses, a key ingredient of khoresht fesenjan, a chicken and walnut stew. And of course, Tehran has the requisite annual pomegranate festival.

Pomegranates have a reputation for health benefits. Traditional uses for diarrhoea, dysentery and intestinal parasites are long established, and the fruit contains antioxidants that are likely to be beneficial; some gung-ho anti-cancer and anti-ageing claims, however, require better evidence. But perhaps we shouldn’t dismiss the psychological benefits of a fruit whose consumption requires our undivided attention.

Jonathan Drori is a Trustee of The Woodland Trust and The Eden Project, an Ambassador for the WWF and was for nine years a Trustee of the Royal Botanic Gardens, Kew. He is a Fellow of the Linnean Society and the Zoological Society of London, and a Member of the Institution of Engineering and Technology. In 2006 he was made CBE. You can read his full biography here or listen to his TED talks here.

This is an extract from Around the World in 80 Trees. Text by Jonathan Drori and illustrations by Lucille Clerc.