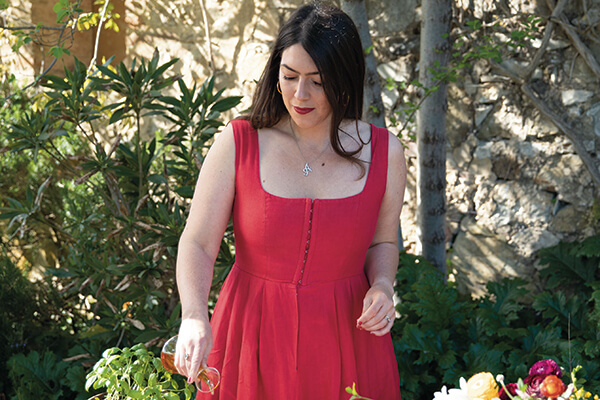 There are many farmhouses in Tuscany, but few are quite so magical as Arniano. It is here in this 18th-century podere that the author of A House Party in Tuscany, Amber Guinness, grew up and learned to cook. And it is here that she established The Arniano Painting School, a residential painting course and immersive art and food experience.

We recently spoke with Amber about why she loves Tuscan cooking, the creative process behind the book, and how readers can capture the essence of Arniano themselves.

Congratulations on the book – it’s such a wonderful celebration of what your mother and late father created at Arniano! Can you tell us a bit about what inspired you to write it?

The idea for this book started five years ago when I noticed that people on our painting courses at Arniano would often finish lunch by asking me for the recipe. What started as the odd request became a surprisingly constant refrain, which is when my wonderful tiger husband, Matthew Bell, started his own refrain: ‘Amber, you must write a book!’

Luckily, I had started to compile a scrapbook of tried and tested recipes, and this dog-eared soup stained folder was the early iteration for A House Party In Tuscany. So, a book about me and my sister’s upbringing, our parents, what they created at Arniano, and the recipes that we had always cooked there had been percolating for years.

But it wasn’t until I met Robyn Lea, a talented photographer and author, that the dream became a reality. Robyn came to Arniano to do a shoot, not about food, but about interiors and my mum Camilla’s work, and I told her about this idea. It was Robyn who picked up the ball and ran with it, taking it back to Kirsten Abbot at Thames & Hudson in Melbourne. Kirsten and I were all set to have our first meeting about the project in London in March 2020, and of course, the world came to a grinding halt.

What seems incredible to me is that Kirsten and Robyn didn’t lose interest in the project due to the pandemic – quite the opposite. They took it up with enthusiasm, over many Zoom calls at hugely inconvenient hours to them in Australia, and took a gamble on me and my idea, despite the fact that to this day, I have never met Kirsten in person!

There’s a wealth of knowledge inside the pages of this gorgeous book! How did you approach the creative process of writing it?

There were various stages creatively for the book. Research and thinking about what I find most useful in a cookbook was the first stage. I really wanted this book to be useful in the kitchen, as well as to look good. What I thought about the most was how to layout the recipes in the book – would it be straightforward: aperitivo, antipasti, primi, secondi etc. or, would it be by chapter, or seasonal?

I also thought long and hard about how to pitch the recipes – would they be for the experienced cook, or people who had never cooked in their lives? Making the layout of the book user-friendly as well as making sure that the recipes were as achievable, clear and as practical as possible was really important to me. As a self-taught cook, I have often been frustrated with cookbooks that tell you to do or not to do something without explaining why that step is crucial. Often when the reasoning is not explicitly explained, I’ve skipped a step which has in fact then resulted in the dish being ruined! So, I really wanted to include the right level of ‘hand holding’ and pre-empting mistakes for the reader so as to avoid some of the kitchen disasters I’d made in the past while still learning.

Once I had made the decision that it would be laid out seasonally, it was just a question of getting on with it! I had an advantage in that I wrote the book between March 2020 and March 2021, so was locked down with no distractions for most of it. I have no idea how people write books without lockdowns!

I would write early in the mornings and then recipe test in the afternoons in time for a late lunch, and later, dinner. My approach to recipe writing was, ‘we have to eat, so let’s combine the two things’. I would write the recipe, cook it, and then make notes on the draft as to what had and hadn’t worked before making it again with whatever changes needed to be made the next day. I also conducted several interviews, which involved hopping in the car and going to speak with local cheesemakers, the family who owns the olive press and Gianfranco, the local truffle-hunter. These were the elements that I would write in the morning before recipe testing.

You describe learning to cook by watching your mother prepare meals for family and friends at Arniano, which is such a lovely image. Is there a meal that most reminds you of cooking with her in the kitchen?

Probably malfatti di ricotta e spinaci, which is in the Spring section of the book. They are one of the first things I can remember my mother making for us. They were always considered a huge treat, as they require some time and meditative patience. Also known as gnudi, meaning ‘naked’ in Italian, the ricotta and spinach ‘gnocchi’ are basically the same as a filling for ravioli and are naked by dint of not being encased in pasta.

I love how in the book you show that Italian food is so much more than just pizza and pasta! Not that I don’t love both of those things very much, but there’s such a world of culinary delights beyond them. What would you say makes Tuscan cuisine unique?

Tuscan cuisine comes from a place of poverty and so is very enterprising. There are lots of beans and vegetables and very little waste, while at the same time making mouth-watering meals out of things that would normally be thrown away. There are a plethora of ways in Tuscany of turning stale bread into something rich and delicious, such as ribollita or pappa al pomodoro. That’s what I love about Tuscan cooking, that it isn’t about fancy sauces or complicated cooking methods, but about bringing the best out of whatever ingredient you have to hand, sometimes using as little as some olive oil and salt.

Is there a recipe you love that didn’t make it into the book?

I wanted to include the recipe for one of my favourite soups, Straciatella alla Romana, but then we decided against it. It’s a real winter warmer, eggs beaten with grated parmesan and pepper and then cooked in a pot of clear chicken broth. It sounds weird, but it’s wonderful. In the end, though, we felt that it’s a cosy, comforting dish, which I make for me and my close friends and family on a winter’s night, so it didn’t really fit in with the theme of entertaining and feast curating.

The way that your tables are laid and your meals are presented seems to be just as much a part of the artistic heart of Arniano as the oil painting lessons! How can readers capture the essence of hosting Arniano-style at home?

By making Pink winks. By buying the best veg, olive oil, tomatoes and salt they can find. By recreating any of the menus at the end of each chapter of the book and by bringing some colour to their table with single stem flowers and Lisa Corti tablecloths.

You also offer ‘Arniano-on-sea’ – the Arniano Painting School experience at Pylewell Park in Hampshire. Can you tell us a bit about that? Does the menu differ from the Tuscan version of the school?

The style of food is substantially the same, very simple and Tuscan, but I do bring in a lot more fish as there is so much locally available. The reason we don’t cook a lot of fish at Arniano is that we’re 90km from the coast, which in Tuscan terms is like Timbuktu. So, we keep the menus more mountain and inland focused as I prefer to use only the freshest ingredients. But it’s a treat to serve locally caught fish and crab with foraged samphire when we’re on the Hampshire coast at Pylewell. I still cook it in the Tuscan way, with olive oil and maybe some tomatoes, capers and lemons, and never with any fancy sauces that I feel mask the freshness of the fish.

The gamekeeper on the estate also always gives us a haunch of venison sourced from the wild deer that roam the park at Pylewell. I always love experimenting with new recipes for cooking venison. It’s such a delicious, gamey meat which is also very sustainable. Wherever the painting courses are, I think I’ll always aim to cook with the best locally sourced ingredients.

Is there a song that encapsulates your approach to life and work?

I’m not sure it encapsulates my approach, but I like bouncing along to Ya-Ya by Lee Dorsey when I’m working. And any Sam Cooke.

Lots of painting courses – I think we’re doing seven this year! So, lots more cooking. More writing and more exploring of Italian food. A visit to my best friend, Beata Heuman, in Sweden. After the whirlwind of writing the book, bringing everything together and now press and promotion, I’m looking forward to spending three weeks on one of my favourite islands in Italy, with very little internet, hiding from the world.

A House Party in Tuscany by Amber Guinness is available now.