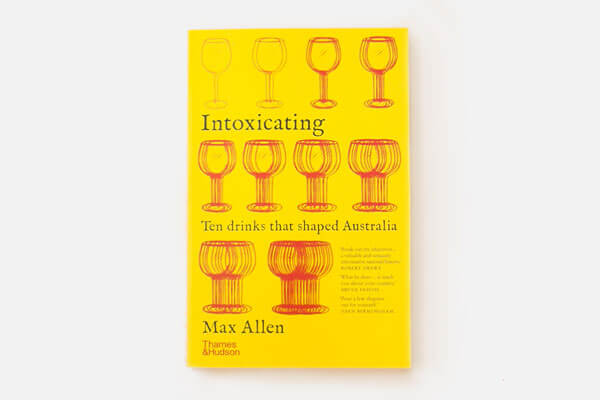 Intoxicating is award-winning journalist Max Allen’s personal journey through Australia’s colourful and complex drinking history, glass in hand. In the book, Max uncovers ten of Australia’s most famous – and most surprising – drinks, sharing anecdotes about each.

In this edited extract, Max discusses his first forays into cider and home distillation, from the chapter ‘Peach Cyder’.

I was born and spent the first few years of my life in Bristol, in the heart of England’s West Country, epicentre of traditional cider production. As a teenager living in London, some of my first experiences of alcohol came in the form of big plastic bottles of cheap Woodpecker Medium Dry cider bought underage at the local off-licence. Then, travelling around the West Country in the late 1980s, I discovered the real thing: farmhouse scrumpy, stuff of legend.

The revelation came in a crumbling 16th-century pub called the Three Tuns in Hay-on-Wye, a little town famous for its bookshops and literary festival, just over the Welsh border from Herefordshire. Saggy wooden benches by the smoke-blackened inglenook, an ancient shillings-and-pence slot machine in one corner, and an even older landlady tending the tiny bar.

When I asked for cider, instead of reaching for the hand pump on the bar or a bottle from the fridge, she rummaged around in the gloom and hauled out a plastic gallon container of cloudy golden liquid. This was scrumpy, made by a local farmer using nothing but freshly pressed apple juice and wild yeasts and time.

‘Be careful,’ she warned, as she poured out a pint. And she was right: with its huge, sharp aromas of pulpy windfall fruit and its furry taste of tough, brown apple cores strewn across a barnyard, this was a deeply challenging explosion of agricultural flavour. I think it might also have had mild hallucinogenic properties. I was hooked.

I first made cider in my backyard in Melbourne in 2011. I’d found a small orchard full of old apple varieties just a few blocks from my house, in the grounds of Rippon Lea, the National Trust–owned Melbourne mansion built by merchant and politician Frederick Sargood in 1868. Like many grand estates established on the outskirts of Australia’s emerging capital cities in the late 19th century, Rippon Lea was originally surrounded by farmland. Much of that country is now covered in suburban houses, schools, cinemas and the ABC’s old Gordon Street studios where my mum worked with my wife’s parents in the 1960s. But in the 1980s, one corner of the estate near the original 1860s stables was converted to an orchard that now boasts over 130 varieties of heritage apples and pears, including Golden Pippin and the classic cider variety Kingston Black.

I’d heard that the gardeners at Rippon Lea had harvested enough fruit to make cider by netting some of the trees to stop the local flocks of lorikeets munching the crop. So I contacted the head gardener and asked if I could gather enough of what was left over – those few apples still clinging unscathed to higher branches, the unbruised windfalls lurking in the grass below – to make a demijohn of cider myself.

Not owning any cider-making equipment at that time, I crushed the apples in the most rudimentary way by bashing them to a pulp with a block of wood in a bucket. Then I borrowed a winemaker friend’s old basket press, wrapped the apple pulp up in parcels of shade cloth, put them in the press, slowly squeezed them and filled a glass demijohn with golden-brown sticky syrupy juice.

At this stage, according to all the modern cider-making manuals I’d read, I should have added some safe, reliable cultured yeast from a packet. Instead, I did nothing. I walked away and waited for nature to take its course. I wanted to do what the farmer who made that scrumpy in Hay-on-Wye had done and just let the wild yeasts on the apple skins and flesh and stalks and pips, in the air, on the press, do what yeasts do naturally: turn sugar into alcohol.

Nothing happened at first. The juice just sat there. But then, after a few hours, up from the depths of the murk emerged tiny pinprick bubbles of carbon dioxide: a definite sign of microbial activity. Fermentation had started. The wild yeasts were getting to work.

As I watched those little bubbles slowly rise, I felt another strange and profound feeling of connection with the generations of people before me who have marvelled at this seemingly miraculous process. And not just the cider makers: the winemakers and brewers, all those innumerable human beings who, for thousands of years, long before scientists identified yeasts and bacteria as the living organisms responsible for fermentation, have simply trusted in the mystery to produce a delicious drink.

I’ve made my own cider each autumn almost every year since that first fermentation epiphany. I’ve bought my own small-scale cider-making equipment. I’ve crawled around on my hands and knees in the mud and damp grass under apple trees foraging for windfalls in the Goulburn Valley. I’ve scrambled over gates and fences to reach fat ripe apples on wild roadside trees in Coonawarra. I’ve made friends with orchardists on the Mornington Peninsula who have old heritage varieties: proper cider apples like Kingston Black, almost-forgotten English apples like Sturmer Pippin, unfashionable Australian apples like Sundowner.

Each year I’ve brought my motley harvest back home and dragged my crusher and press out of the garage and invited friends and family, reluctant teenagers and eager neighbours, to help me make cider. And after the crushing and pressing, we’ve all sat down for a meal and opened bottles of last year’s batch and celebrated the season.

I now take bottles of my cider with me when I travel, to share with friends or to pour for winemakers or brewers or other, professional cidermakers. Sometimes people even say they like it, which makes me feel proud – and connected, as though the annual autumn West Country rituals are echoing in my own creaking basket press.

Intoxicating is out now. Text by Max Allen and cover design by Josh Durham.