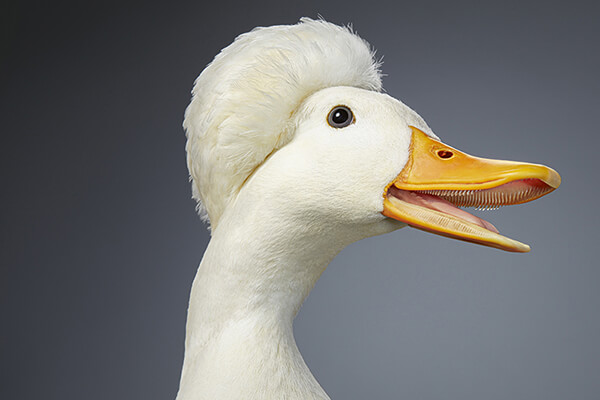 Working for years in his studio and in the field, internationally acclaimed photographer Tim Flach has portrayed nature’s most alluring creatures alertly at rest and dramatically in flight, capturing intricate feather patterns and subtle colouration invisible to the naked eye.

The result of much patience, precision and persistence, Birds features more than 130 extraordinary photographs. Read on to discover five of our favourite images from this awe-inspiring book.

Like all other crested pigeons, Jacobin pigeons carry a specific mutation in a gene called EphB2. This gene regulates the development of placodes, the little disks of tissue on the skin of an embryonic bird from which their feathers will emerge. In ordinary pigeons the gene is active at the bottom of the placode, which instructs the feathers to grow down the neck. The mutation, however, causes EphB2 to switch on at the top of the placode, instructing the feathers to grow up the neck instead, effectively turning them upside down to produce a crest

These regal birds are the largest living pigeons in the world, tipping the scales at a whopping 5½ pounds (2.5 kg)—six and a half times heavier than a feral pigeon and nearly the weight of a chicken. The males become extremely territorial during courtship and vigorously display their exquisite crowns in the hopes of establishing dominance and winning a mate. The young pigeon pictured above is just twenty-one days old, and still molting into his juvenile plumage. Only after he has finished growing will he replace these feathers with his impressive adult plumage.

These birds have been bred for centuries to enhance their crested appearance, but the dominant allele that lends these birds their comical crowns can also be lethal, with embryos that receive two copies of the crested gene invariably dying while they are still developing in the egg. To avoid this, breeders usually cross crested ducks with another breed, which preserves the dominant crested trait in half of the resulting offspring, and completely prevents the excess mortality associated with pure-breeding.

For these comical-looking birds, an exquisite handlebar mustache is more than a fashion statement—it’s an advertisement of good health. Like all other birds, these terns can only grow out their plumes while molting, an extremely energy-intensive process during which they sequentially replace all of the feathers on their bodies. This allows them to use the unique facial feathers to assess the fitness of prospective mates: since growing a pair of long ornamental feathers requires a surplus of food, birds with longer mustaches are better at feeding themselves and are therefore likely to be better at raising young.

Unlike many other gregarious birds, flamingos, pictured here in a group, or “flamboyance,” are also unusually cooperative breeders: rather than defending just their own newly hatched offspring, the birds gather their ungainly, flightless young together in a creche, which is then defended by just a few designated guardians. This innovative day-care system frees the rest of the adults to spend their entire day foraging, allowing the birds to gather more food and feed more mouths without increasing the risk of predation.