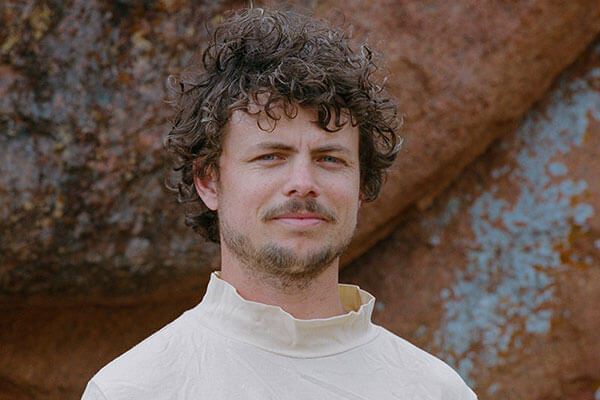 It is more important now than ever to inspire and educate children to think about the environment. Mathew Bate’s first picture book With a Little Kelp from Our Friends is certainly a step in the right direction, delving into the significance of seaweed and it’s potential to help tackle climate change. We asked Mathew to tell us a bit about how he became so acquainted with seaweed, its prominence in Australia and what led him to writing this vibrant book.

You are clearly a person of many talents, having worked as a former co-editor of Matters Journal, being a published poet and non-fiction writer and someone who knows their way around a camera. Do you have a favourite creative project that you have worked on?

That’s a tough question for me, I feel like all of my creative projects are part of one big lumpy collage — one thing always informs the next and so on. My creative process is largely me just bumping into things. I remember being in an introductory poetry subject at uni. We all had to put together a portfolio of poems. I went down to a velodrome near where I was living to write my first poem for this portfolio. A peculiar choice. I must have thought that watching bikes go round and round might spin some words out. I arrive and the velodrome was empty. Not a bike in sight. I sat in the middle on a grassy bit and squinted at the sun. Eventually a man and his daughter arrived, and I thought here comes my bike poem. But they didn’t have bikes. They unfurled a kite that was shaped like a boat. They took turns sailing it in the wind. I remember being so taken by the beauty of it all. I wrote my first poem that day and it had nothing to do with kites, or bikes. I’ve been jotting down things I see ever since.

You are currently studying regenerative agriculture — the first degree of its kind! Can you tell us a bit about what this means?

I’ve been studying the regenerative agriculture course at Southern Cross University for a year now. It’s becoming a bit of a buzz word but regenerative agriculture is essentially an umbrella term for a whole array of agricultural techniques and philosophies that aim to heal landscapes. We’ve gone off on a bit of a dangerous tangent with industrial agriculture and our planet is suffering because of it. Regenerative agriculture represents a break to that destructive and extractive approach to farming. Now, we’re seeing lots of inspiring farmers out there that are revitalising landscapes with a more holistic approach. Hopefully one day soon I’ll be one of them!

What led you to becoming a self-proclaimed kelp enthusiast?

I honestly feel like seaweed grabbed me by the ankle and pulled me underwater. I was first awoken to seaweed’s regenerative potential by Tim Flannery’s book Sunlight and Seaweed and Paul Hawken’s book Drawdown. I then ended up spending some time with Tim Flannery and a group of people on Heron Island, on the southern tip of the Great Barrier Reef, and from there my curiosity for seaweed kind of spiralled into an obsession. A healthy obsession.

For those of us who have grown up in Australia, what type of kelp would we be familiar with? What would we be surprised to find out about it and its potential uses?

We’re spoilt in Australia when it comes to seaweed diversity. South Australia is actually a seaweed haven; 60% of the seaweed’s found on the South Australian coastline are found nowhere else in the world. There are thousands of different types of seaweeds you can find washed up on the beaches in Australia. Everyone seems to love the kelps, a family of about 120 large brown seaweeds. Giant kelp can grow one metre in two days and can reach full maturity, up to 50m in length, in a matter of months. Recently there’s been some promising research into seaweed biofuels that can power vehicles, which is pretty neat. Many people are also not aware that there’s a long history of Aboriginal and Torres Strait Islander Peoples using seaweed to make shoes, water carriers and shelters.

Where did the concept behind With a Little Kelp from Our Friends come from?

I suppose I really wanted to pull together all of these wonderful things I’d learnt to love about seaweed and present them in a book that everyone could read. There was a strong impulse to weave a narrative together that inspired love and wonder for the natural world, something that I think should be established as common ground. I was also thinking a lot about how to talk to children about climate change in a way that invites curiosity.

What was the research process behind the book like?

I was lucky that by the time I started planning the book I’d already done a fair amount of research. But there was a lot of research over several years. There were definitely times when the amount of research really tested my commitment to seaweed. Fortunately, I had a lot of people who were willing to share their knowledge and help me wade through the sea of information.

If children and adults alike should take one thing away from With a Little Kelp from Our Friends, what should it be?

Seaweed’s power doesn’t come from its ability to extract, prey or trick but its ability to create community and provide shelter and food. In that sense, we should take a leaf from seaweed’s book.

Oh gosh, who knows. Let’s see what I bump into next. Perhaps seaweed farming!

With a Little Kelp from Our Friends is available now. Text by Mathew Bate, illustrations by Liz Rowland and design by Hope Lumsden-Barry. Article photography by Charlie Perry.