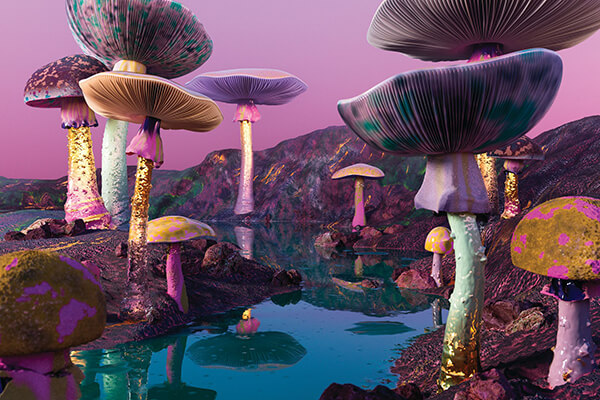 Fungi have a range of natural abilities that we can use to heal damaged habitats. This is known as mycorestoration. Scientists can leverage fungi’s ability to decompose, and engineer it to break down pollutants in the environment, particularly xenobiotics. Xenobiotics are chemical substances that have been introduced by humans and do not exist in nature, such as pesticides, cosmetics, industrial chemicals and drugs.

Pioneering a new field of science is challenging and takes time, money and grit. But extraordinary circumstances need extraordinary solutions – and fungi can provide them

FUNGI AS A WATER FILTER (MYCOFILTRATION)

Earth is the only known planet within our solar system that has bodies of liquid water on its surface. This clear liquid is one of our most precious resources, but water supplies are limited. Less than 1 per cent of the water on Earth is accessible and fit for consumption, and this is currently shared between households, agriculture and industry. Over 97 per cent of Earth’s water is too salty and 2 per cent is fresh water locked away in groundwater, glaciers and ice caps.

Flushing the toilet or running the washing machine creates wastewater that is not reusable until it is treated. Roughly 80 per cent of the world’s wastewater is left untreated and allowed back into our waterways, putting the health of our water ecosystems at risk. Even in developed countries, wastewater is not properly decontaminated due to outdated treatment plants, sewage overflows and ineffective household sewage treatment systems. The source of untreated wastewater is difficult to pinpoint, as it originates from a range of sources, which often include agricultural and stormwater run-off.

A promising example of an affordable and feasible solution is mycofiltration. This process uses fungal mycelium as a biological filter to capture and remove contaminants from water and soil. Depending on the fungal species, mycelium can even eat through and digest pollutants such as pesticides, mercury and petroleum products. If you peer at fungi through a microscope, you’ll see that the cells of mycelium are about 0.5–2 microns wide (for comparison, a strand of human hair is 50 microns wide). Mycelium grows as interconnected cells that resemble a netted fabric.

Armed with this knowledge in the 1970s, Paul Stamets imagined that this fabric of interconnected cells could become a biological filter. He tested this hypothesis on his waterfront farm, installing large sacks filled with substrate inoculated with mycelium of the garden giant species (Stropharia rugosoannulata) around water basins. The sacks formed a netted barrier to catch contaminants as water passed through. This mycofilter cleansed the water, resulting in a 100-fold drop in coliform levels – the bacteria that is present in the digestive tracts of animals and found in their waste. The mycofilter successfully reduced fecal matter in the water, alleviating the downstream impacts of contaminated water. This finding was later investigated and confirmed by the US Environmental Protection Agency (EPA).

A mycofilter can be as simple as a hessian burlap sack filled with wet straw and wood chips, and inoculated with mycelium. It is inexpensive and simple to set up. Also, the small size of the mycofilter means that it has minimal impact on ecology and can be installed around sites such as farms, urban areas, roads and factories. Having a mycofiltration system in these areas can help decontaminate wastewater before it makes its way back into our waterways.

Mycelium is known for its insatiable hunger for organic matter. Specifically, the oyster mushroom (Pleurotus ostreatus) is able to process and neutralise bacteria such as Escherichia coli (commonly known as E. coli), working with its mycelial membrane to filter out microbial pathogens from contaminated water.

Tradd Cotter, mycologist and owner of the company Mushroom Mountain, runs workshops on setting up mycofiltration systems. ‘We’re using a cage that looks like a crab pot, that can be refilled with wood chips. It’ll last for a year or two. And if the cage stays put, it can be emptied out and refilled with new wood chips.’ Mycofiltration is a young science and commercial applications are scarce, but this has not stopped property owners from experimenting with this fungal capability.

FUNGI AS A FOREST AND SOIL BUILDER (MYCOFORESTRY)

Forests cover one-third of the land on Earth and their diverse habitats are home to 80 per cent of the world’s (known) plant and animal species. As for humans, billions of people in rural communities rely on forests for food, shelter, medicine and water. Forests are also a vital player in the effort against climate change as they act as a carbon sink– they absorb, or sequester, large amounts of carbon dioxide and store the carbon in their wood. Old-growth forests are particularly critical, because their roots have extended deep into the soil for centuries and sequester extra carbon out of the atmosphere, helping to manage today’s rising temperatures.

Yet deforestation – legal and illegal – continues. Aside from permanent losses of biodiversity, deforestation sets off a domino effect of land degradation impacts, including increased erosion, reduced soil fertility and piles of wood debris. Unfortunately, the standard treatment of this ‘waste’ is incineration. This releases additional greenhouse gases into the atmosphere and destroys the potential for the nutrients from the wood to be recycled back into the soil. This calls for sustainable forest management practices. One of these is mycoforestry – the use of fungi as a forest and soil builder.

Wood debris in forests can be chipped into smaller pieces, then inoculated with native saprophytic fungi species to speed up the decomposition process. This redirects vital elements and nutrients back into the soil for use by the rest of the forest. Fungi also produce glomalin at the hyphal tips, which is what fungi use to store carbon. It’s a sticky substance that binds together soil particles and builds soil architecture. This aerates the soil, helps water and nutrient retention, and regenerates impacted habitats.

Along with forests and oceans, soils also act as an invaluable carbon sink. Research found that mycorrhizal fungi in boreal forest islands in Sweden hold up to 70 per cent of the total carbon stored in soils. This means that trees connected to a mycelial network absorb carbon from the atmosphere and then transfer it into the mycelium for storage. Fungi play a critical role in regulating the global climate.

Mycoforestry was put into action in Colorado by Jeff Ravage, North Fork Watershed coordinator for the Coalition for the Upper South Platte and researcher at Denver Botanic Gardens. In 2016, he and his team of researchers set up two test sites in Denver Mountain Parks. These sites had been logged and abandoned, leaving 30 centimetres of waste wood spread across the entire forest floor. Ravage’s team recruited the help of wood-rotting species Pleurotus pulmonariuson one site and Morchella angusticepson on another.

Over five years, fungi in the first site consumed the wood chips and created 5 centimetres of topsoil – organic, mineral-rich soil from which seeds germinate – with a few centimetres of partially decomposed organic matter on top. Before this, the ground was just gravel with dust. The second site exhibited a slower rate of seeding, decaying 75 per cent over two years. The team will be treating this site with a second inoculation in 2021 to further investigate the results.

Want to get started on your own mycoforestry project? Watch out for a paper from Ravage, who wants ‘to create useful tools and distribute them freely, because we don’t have enough time left for somebody to figure out how to make a profit on saving the planet. We’re not out to create a patent,’ he says. ‘How can we patent nature?’

Mycoforestry remains an experimental forestry practice conducted by environmental groups and volunteers. Replenishing the soil in forests, improving soil fertility and increasing forest ecosystem resilience is of both ecological and economic interest. A greater uptake of mycoforestry by forestry management groups, logging companies and council decision-makers will move the science forward and protect the future of forests.

FUNGI AS A TOXIN NEUTRALISER (MYCOREMEDIATION)

We may not see it, taste it or feel it, but we are entangled in an array of environmental toxins. Microplastics in waterways, nanoparticles in the air and noxious chemicals in soils were all introduced by human activity and have become accepted as invisible causes of illness and death. Contaminants and pollutants are abundant in our air, water and soil, all around the world.

Traditional methods of remediation, such as disposal into hazardous waste facilities, incineration and chemical treatments, are expensive, energy-intensive and only move the contamination to someone else’s backyard. We urgently need to find more permanent solutions to clean up the mess we’ve made on Earth. Many scientists have turned to mycoremediation, the use of fungi to decontaminate the environment. After all, fungi are nature’s decomposers and this strategy has been effective for Earth for over a billion years.

In forests, a major source of nutrients is from fallen trees, released as the trees break down. Their sturdy trunks are reinforced by lignin, a complex material that binds together the building blocks of wood. Only fungi can excrete enzymes powerful enough to decompose lignin. Luckily for us, the bonds in lignin are similar to those in petroleum, pesticides, plastics, dyes and a range of other toxins, which means mycelium can disassemble the hydrocarbons present in a wide spectrum of toxins. In particular, saprophytic fungi varieties called white rotters, such as oyster (Pleurotus ostreatus) and turkey tail (Trametes versicolor) mushrooms, are relatively easy to grow and love molecular decomposition.

In 2016, Fungaia Farm, a mushroom farm in California, used oyster mushroom spawn to remediate gallons of diesel fuel that had spilled from a storage tank. They removed the contaminated soil and placed it between layers of fresh straw and burlap that were inoculated with oyster mushrooms. The mycelium got to work. As it fed on the petroleum, hyphae threaded throughout the crevices of the oil-laden soil. Later testing showed that all contamination was reduced to a non-toxic level and some soil was even oil-free, allowing the land to be reclaimed for landscaping.

Levon Durr, the owner of Fungaia Farm, has noted that the project wasn’t without its mistakes and he has since published a report to aid grassroots practitioners. Another diesel spill was discovered in 2020 and the Fungaia Farm team hopes to detoxify the soil using mushroom spawn once again. But convincing landowners to try mycoremediation is challenging. ‘It can cost US$15,000 for one remediation treatment on site and it quickly adds up because it’s a biological process and may need multiple treatments over the course of a year to get the soil to a non-toxic level,’ says Durr, ‘compared to paying US$45,000 once-off to dig up the contaminated soil and haul it away.’

Conditions are also difficult to control in these outdoor projects. It may be cold and rainy one month, but dry and hot the next. If temperatures are too high, the piles of soil and burlap can turn into a compost heap and kill the mycelium. Controlling for a myriad of variables on the field takes patience and resilience. Fungaia Farm continues to educate and produce mushroom spawn to cultivators for food production and mycoremediation projects.

Mycocycle, founded by Joanne Rodriguez with Peter McCoy as chief science officer, is pioneering a new industry: using fungi to divert waste from landfills. They are remediating waste from roofing, asphalt and chemical manufacturing industries. As the mycelium consumes waste and binds it together, Mycocycle creates new materials from the process. There is strong interest from manufacturers in these industries for a cost-effective and sustainable waste-treatment solution. The challenge Rodriguez faces to scale up mycoremediation ‘is the lack of interdisciplinary backgrounds to move these discoveries out of the lab and into real world treatments’. To combat this, Mycocycle launched an equity crowdfunding campaign in 2020 encouraging people to join the cause and accelerate change. McCoy is also the founder of MYCOLOGOS, an online education platform for all things fungi.

This is an edited extract from The Future is Fungi by Michael Lim and Yun Shu.

The Future is Fungi by Michael Lim and Yun Shu is available now.