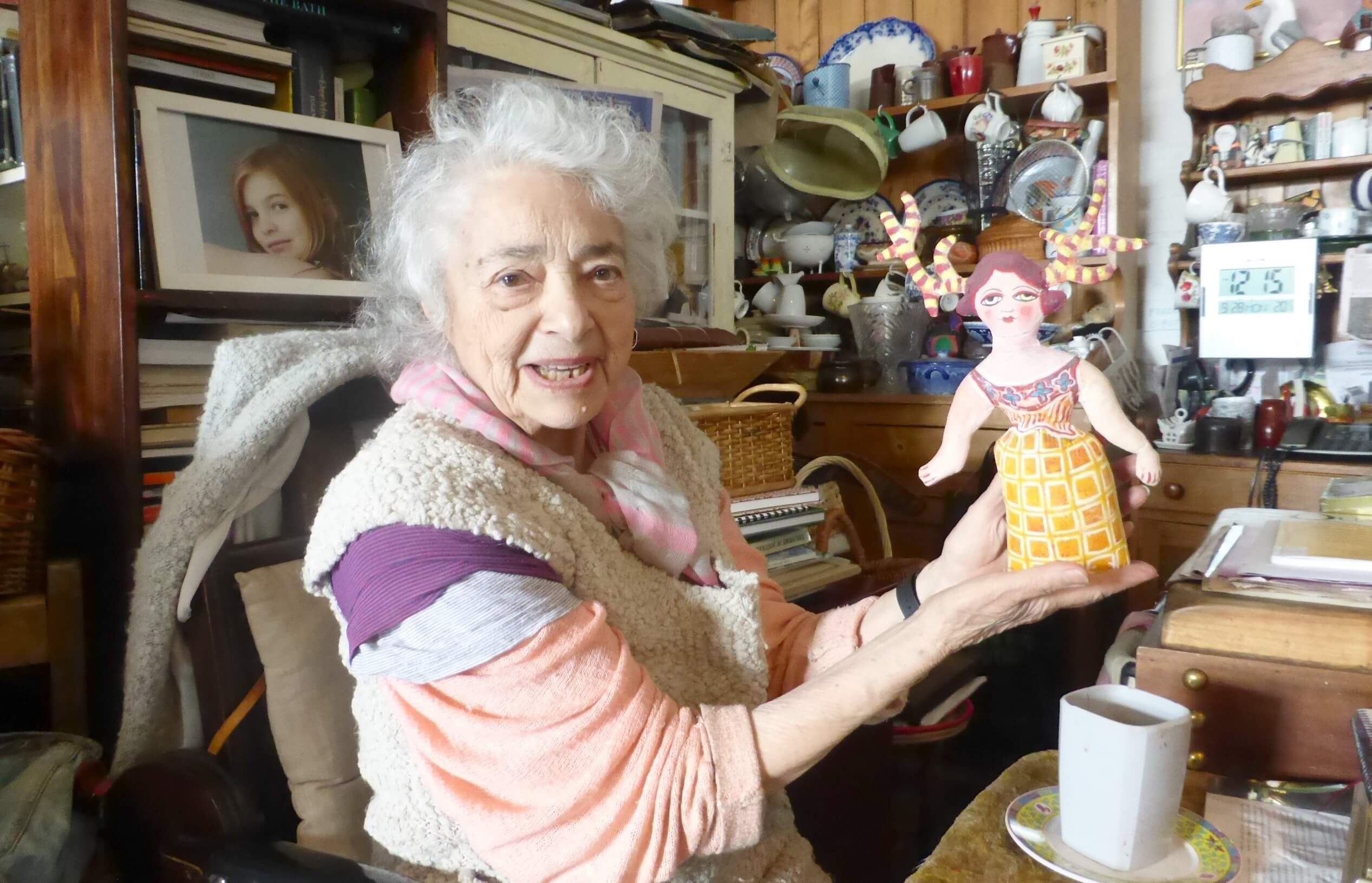 A glimpse into Mirka’s first strides in Melbourne after emigrating from Paris, taken from the chapter ‘Movers of the new force’.

Upon arriving in Australia, the Moras found themselves in a house at number 6 Ellindale Avenue, in the suburb of McKinnon, 12 kilometres to the south-east of Melbourne’s CBD. Feeling dislocated and isolated, Georges and Mirka did not like it at all: ‘I couldn’t stand it, it was so dead.’

Mirka had always sewn her own dresses, and made frequent Saturday trips to the city to buy fabric from the fashionable Melbourne department store Georges. On one of these visits the man behind the fabric counter asked her if she was a seamstress. Although this wasn’t really the case, she nevertheless answered ‘Yes’. Impressed by this French ‘dressmaker’, he began to send her clients. Some of the commissions were challenging – a man’s suit, for example. But Mirka had always been resourceful; she waited until her husband was in bed and unpicked his jacket to see how it was made, sewing it back up again afterwards, all done while he was still sleeping. She soon had many customers, making ‘ladies clothes, suits and all. I never said no to anything. I had to work so hard, and I had the two girls to help me’. One of her assistants was Helen Ball, who would later marry the painter Leonard French (1928–2017). Mirka was already taking liberties with convention: she recalls a ‘very beautiful and elderly lady’ for whom she made a raincoat with slit pockets. At the fitting, Mirka realised that she had put one pocket up and one pocket down. But the lady ‘must have seen my shock when I saw that and she said, “Oh, this is so modern and I love it, I love it!”’ and kept it as it was.

Through a woman they met on the plane to Melbourne, the Moras were introduced to Colin Wainwright, a lively character who had many connections in the city. Colin became a friend – and even came to live with them in McKinnon. One day Mirka, tired of the suburban house after a few months living there, told him that she could not stay any longer – she wanted to find a proper studio to live in. Colin found the studio/apartment for her – in the centre of Melbourne, at Grosvenor Chambers, 9 Collins Street. It had a rich history, having been the studio of artists Sir John Campbell Longstaff (1861–1941) – who had once demolished a wall to let in the horse he was painting; Frederick McCubbin (1855–1917); and Arthur Streeton (1867–1943). The situation wasn’t straightforward: the landlord was a tad grumpy, and other people, including the painter Lina Bryans (1909–2000), were also interested in the studio. It took a lot of persuasion (which included suggesting that Mirka was opening a French-style haute couture studio) and Georges’ patience and diligence to convince the old man to rent it to them. In mid-1952 the family moved into 9 Collins Street, where they lived for the next 15 years.

Mirka was visited at the studio by many customers. The most important encounter – for her, for Georges and for Melbourne’s art world – happened via an introduction from the Herald newspaper’s music critic John Sinclair, whom she had met at a party at a customer’s house. (He was notorious for his sharp tongue: ‘Beware of snakes, spiders and Sinclair’ was a common warning given to musicians coming to play in Melbourne.

Sinclair was a friend of John and Sunday Reed. John (1901–81) and his wife Sunday (1905–81) were patrons of modern Australian art and literature, and their house, ‘Heide’, in Bulleen, Victoria, was a hub for avant-garde artists. Sidney Nolan (1917–92), Albert Tucker (1914–99) and Joy Hester (1920–60) lived and worked at Heide for lengthy periods. In 1977, Sunday donated 25 of the 27 paintings in Sidney Nolan’s Kelly series – painted by Nolan at Heide – to the National Gallery of Australia. The Reeds’ house and collection ultimately became the public art museum Heide Museum of Modern Art.

Sinclair recommended the young French seamstress to Sunday Reed, who rang the next day to order a dress. Sunday apparently never wore the dress (an elegantly simple white linen garment), and instead hung it on the wall because it was so beautiful.

The meeting with Sunday Reed was to have a great influence on Mirka’s career and on Melbourne’s art scene for the following decades. It triggered a long-lasting friendship between the Reeds and the Moras, who became instrumental in the revival of the Contemporary Art Society (CAS) and in the creation of the first Museum of Modern Art in Melbourne, in a local environment that was at the time quite bleak for the arts.

Sabine Cotte is a French-Australian paintings conservator. Trained in Paris and Rome, she worked for French national museums for ten years before moving to Melbourne in 2001. She has led several workshops in the Himalayan region for UNESCO, ICCROM and private NGOs, training local people in conservation and in disaster recovery, and has published articles in professional journals and given talks at conferences. She is an Honorary Fellow of the Grimwade Centre for Cultural Materials Conservation, University of Melbourne, where she is also a casual teacher. Her PhD focused on the materials and techniques of Mirka Mora and led to the writing of this book.