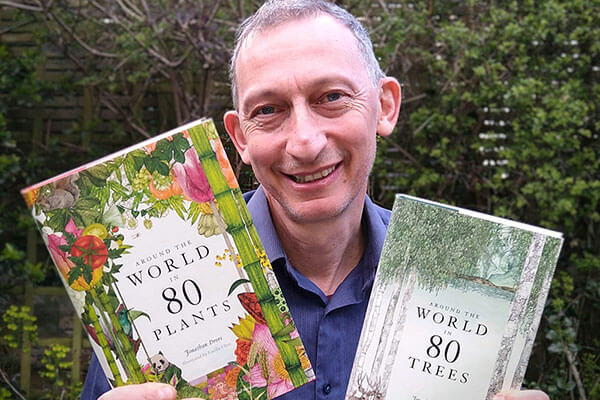 Jonathon Drori’s first book Around the World in 80 Trees resonated with readers far and wide looking to find inspiration through nature. Now, Jonathon is back with Around the World in 80 Plants, bringing to life the science of plants by revealing their links with our own history, culture and folklore. We spoke to Jonathon about his passion for science, strategy and botany and some of the most fascinating plants featured in the book.

Having worked as an author, public speaker, an adviser and board member for a variety of organisations, an honorary professor, the founding Director of Culture Online at the UK Government’s Department for Culture Media and Sport, an Executive Producer for the BBC and so much more, do you have a career highlight that you are most proud of?

Gosh, that’s the kind of list that even my parents would have thought was just a bit too much! I spent some time as Editorial Director for BBC Online, when the medium was just being invented. That was pretty exciting. And my nine years on the Board at the Royal Botanic Gardens, Kew were special for the combination of science, beauty, strategy and some amazing botanical expeditions.

How did you become so passionate about nature?

My parents definitely inspired me. They told stories about plants and animals to my brother and me and although we both lost interest in those tricky teenage years, something obviously sank in!

The success of 80 Trees was a wonderful surprise to me. I wrote the kind of book that I wanted to read – a book with plenty of science, but not a science book. A book with plenty of history, but not a history book. Same for culture, folklore, etymology and so on. I couldn’t find anything out there that entwined them all, with proper storytelling. So, I had a go, and it seems that people like that kind of thing. Of course, Lucille Clerc’s gorgeous, whimsical illustrations really brought it to life. I realised we were onto something, which made me want to do another book. Being able to research and write about things that completely fascinate me is the most wonderful luxury. I am humbly grateful!

What was the process behind selecting the plants featured in the book?

I looked for plants with a good geographical spread around the world, and where I felt there was something new to say. I set myself the challenge that any reader, coming from any area of interest, should find something new and special in each of the 80 biographies of plant species in the book.

What is the most unusual plant we can find in the book?

The Welwitschia, of the desert straddling Namibia and Angola, is a very strange plant indeed. Depending how you look at it, it can be one of the ugliest or one of the most beautiful plants on earth, and that’s the only place it grows. It can live 500 years and yet it only ever has the same two leaves, that just keep growing from the base and withering at the ends. Another unusual plant is the Iboga from Gabon and Cameroon, for the mind-altering effects it has on people who use it in Bwiti initiation rites.

Why are plants so inspiring to us?

Perhaps because in the end, human life, in fact all life on earth depends on plants. I love them because they are so varied, get up to such strange behaviours and have such odd, poignant, bizarre and even funny relationships with humans.

My philosophy has always been to make connections with interesting people and good things happen. I don’t know what’s next. Something will turn up!

Around the World in 80 Plants is available now. Text by Jonathon Drori and illustrations by Lucille Clerc.