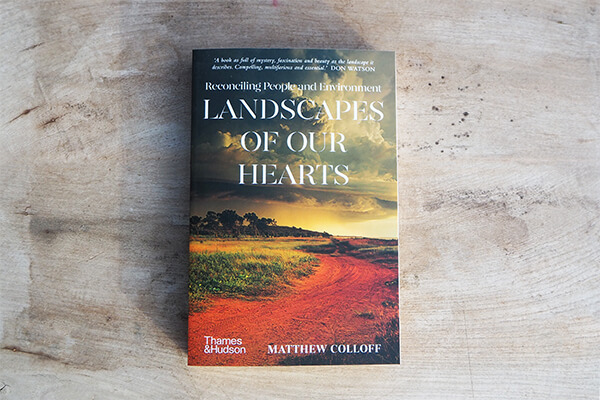 Landscapes of Our Hearts is an epic exploration of our relationship with this country. From distinguished research scientist and award-winning writer Matthew Colloff, the book asks the question: ‘If we look afresh at our history through the land we live on, might Indigenous and non-Indigenous Australians find a path to a shared future?’

In this extract, Colloff discusses the importance of responsibility in the pursuit of belonging for Indigenous and non-Indigenous Australians.

Most Australians have connections with more than one place, whether they are Indigenous people or descended from 19th-century European settler-colonists or more recent migrants, refugees and asylum-seekers. We value and maintain our cultural identity. For many Australians, the expression of culture singles them out as ‘different’ from other Australians and creates the tension between integration into ‘the Australian way of life’ and the multicultural plurality of modern Australian society. For example, the children of Greek migrants who refused to go with their parents and older relatives to large group barbecues and picnics in parks because they regarded such an event as ‘woggy’; in other words, it represented their involvement in a cultural activity that would identify them as migrants to other Australians.1

But there is no contradiction between citizenship and cultural diversity. Attempts by politicians and populists to construct and promulgate ‘a national identity’ have tended to be unsuccessful. Sociologist Robert Van Krieken writes, ‘Political and cultural citizenship do not necessarily coincide – it is possible to be defined legally as a citizen, but still remain an outsider, with the rules governing the transition from one category to the other remaining obscure and elusive.’2 I would argue that the process of transition from one to the other often begins with developing a connection with this land and the process of place-making.

Are we all strangers in our own land, trying to make a home wherever we find ourselves? For Australians of Anglo-Celtic descent whose families have been here for several generations, they may have been born in one place, grown up in another and live as adults somewhere else again. For many Indigenous Australians, their ancestors may have been forcibly removed from their lands, their grandparents or great-grandparents raised on a mission or an Aboriginal reserve many hundreds of kilometres away, and their parents may have moved from place to place to find work, as Stan Grant’s parents did, all the while trying to stay in contact with the diaspora of their kin.

For many of us migrants, the idea of referring to Australia as my country carries with it a deeply felt sense of ambivalence. This tension emerges not only from the cultural connections with the countries of our birth but also an unease about whether we have such a right, considering this land was taken by invasion and dispossession of its Indigenous peoples during the one hundred and forty years of the Frontier Wars. As Henry Reynolds wrote: ‘It was only by forgetting that white Australia was able to overlook the violent foundation of the nation.’3

Historian Peter Read sums up the tension as follows: ‘how can we non-Indigenous Australians justify our continuous presence and our love for this country while the Indigenous people remain dispossessed and their history unacknowledged?’4 Some of us make our place and feel a strong sense of belonging accordingly. We feel we have a right to belong. Others of us feel no such right. Australia always was and always will be Aboriginal land. Belonging is a deeply personal journey, travelled by multiple routes. There was nothing in the citizenship interview and examination that I took in 1996 on how to go about the process of belonging. The only mention in official documentation on citizenship is the statement that volunteering can be a great way of increasing one’s sense of belonging to the Australian community and that, ‘You can walk the desert or the shore, the mountains or the rainforests. Every step you take is a step closer to belonging to this vast and vibrant land.’5 Indeed. A route to belonging through volunteerism and tourism. Were it that easy.

For some, claiming continuity with Indigenous people and the environment as part of our non-Indigenous heritage is a means of achieving a sense of belonging. In an interview with Peter Read, environmental historian Tom Griffiths stated: ‘Aborigines and environment: these are the two great historical revolutions of our generation. Writing both into Australian history allows you to reach back beyond the moment of invasion and draw you into deep time as part of our own inheritance. We should discover the continuities.’6

Griffiths’ perspective echoes the need to reconcile a sense of attachment to place with the history of environmental and cultural change. With this need comes a set of responsibilities to ‘a vision of a morally and environmentally integrated Australia’, in which the relationship between humans and the environment is one in which people ‘share its past and provide for its future’. Yet can non-Indigenous Australians legitimately claim to belong to deep time while Indigenous Australians remain dispossessed and governments continually seek to obstruct practical processes of reconciliation?7

Perhaps one way for non-Indigenous Australians to think construc­tively about these vexed issues is not just to focus on assumptions about rights of belonging, but on their responsibilities. Simply put, if our sense of belonging is to be gained through a continuity with deep time history, then we have an equal responsibility to Indigenous Australians, ourselves and our shared environment to do what we can to achieve reconciliation. We might start by considering and adopting elements of the ancient environmental knowledge, values and rules of Indigenous Australians that they observe and we do not. Perhaps this might form a basis to begin to shape our common future in more sustainable ways.8

If there can be no lasting or legitimate sense of belonging without a sense of responsibility to the land and each other, then here’s the challenge, as articulated by Tom Griffiths: ‘If all Australians are to rejoice in the deep past, then we must ask the non-Aboriginals to share responsibility for its mistakes. If all Australians are to rejoice in the deep future, then we must ask the Aboriginals to share in its responsibility.’ Idealistic and difficult this may seem in practice, but the alternative is worse; a business-as-usual continuation of what we have already done: ‘the mere expropriation of past and future’.9 If we can acknowledge the past, reconcile the present and nurture the future, then perhaps all Australians, one day, may truly find a place we can call home.

1     Denis Byrne, Heather Goodall & Allison Cadzow, Place-Making in National Parks: Ways That Australians of Arabic and Vietnamese Background Perceive and Use the Parklands along the Georges River, NSW, University of Technology Sydney and Office of Environment and Heritage, Sydney, 2013, p. 17.

Landscapes of Our Hearts is available now. Text by Matthew Colloff, cover photography by Louise Denton Photography, and cover design by Alissa Dinallo.