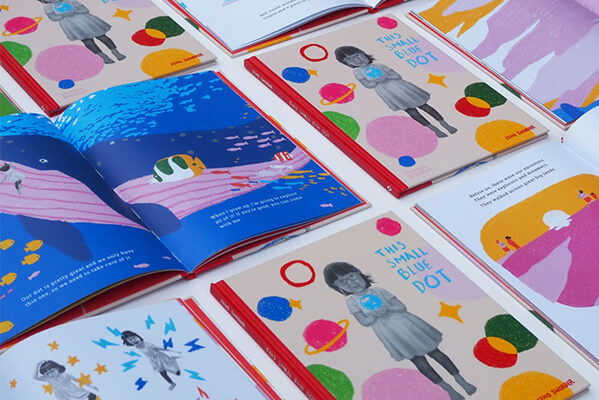 This Small Blue Dot is an award-winning children’s book with a powerful message of hope and interconnectedness.

We recently chatted with author, Zeno Sworder, about his daughter’s response to the book, how it felt to win a CBCA award, and plans for his next book.

Congratulations on winning the CBCA New Illustrator Award last year! tell us about that: how did it feel to win?

It was a surprise and also a joy to share that recognition with my daughters who were such a big part of the book. This Small Blue Dot was originally made just for them – an audience of two. It has been wonderful to hear from teachers and parents who are passionate about the book and see the book reaching an audience around the world.

You’ve previously talked about loosely basing the main character in your first book on your oldest daughter. How did she respond when she saw your illustrations?

She loves the book and has started making her own picture books in folded and stapled paper. I think she just finished her eighth book (about a talking booger). So she has me well and truly beat. Her younger sister who is four is much more enthusiastic about This Small Blue Dot and used to proudly march around the house with the book, telling visitors her sister was inside.

You’ve got a new book coming out later in the year. What can you tell us about it?

I am excited for the new book, My Strange Shrinking Parents, to be out in the world. It was written in a flash but has taken more than two years to illustrate. At its core it is about migrant parents who sacrifice their height, bit by bit, for their son’s wellbeing. As a result, they become smaller as their son grows taller. It is a strange and surreal story that describes the journey from child to parent and the shape that a life takes when viewed from a certain distance. While it is deeply personal it also reflects the story of many young people who grow up feeling different and out of place.

Can we expect a character based on one of your daughters in this one?

Unfortunately, they don’t show up in this one but there are projects in the future that I would love to include them in.

How would you describe your creative process? Do you find that the story or the imagery come to you first?

The process is always changing for me. If there is a recipe for making picture books, I haven’t found it yet. Generally, ideas and characters will linger with me until I draw them or write them down. My Strange Shrinking Parents was written at 2am in the morning while carrying my youngest daughter up and down the length of the house trying to get her back to sleep. I set up a notepad in the kitchen at the far end of the house and wrote a sentence each time I passed it. In my mind I had a very strong image of the parents standing in a garden at sunset, which I drew and painted over the next couple of days. That first image of the parents eventually became the final page of the picture book.

Has this process changed at all since you wrote your first book?

I am regrettably very slow when it comes to illustrating my stories. Part of that is my preference for drawing on paper with traditional tools rather than working digitally. I have tried to speed up this process but find that I work better at a slower pace where I can lose myself in the imaginary world on the page.

Is there a song that encapsulates your approach to life and work?

What a great question. I am tempted to say chopsticks on the piano, which incidentally is the only piece of music I can play (much to my mother’s shame – she is a gifted pianist). A poem that I hold close to my heart is Robert Frost’s The Road Not Taken and that is probably a better answer. I tend to instinctively take the more difficult path through things as I feel it will be the better teacher.