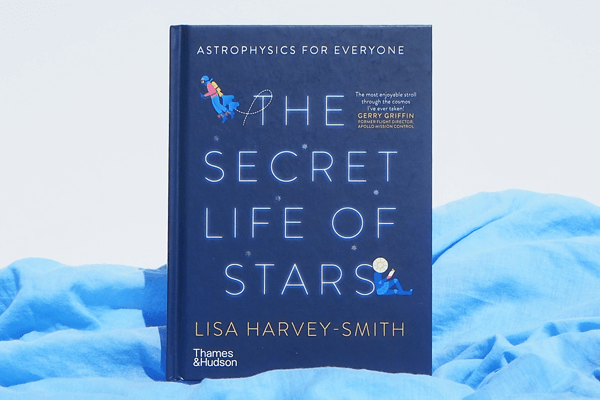 The Secret Life of Stars is a fun and accessible introduction to the many remarkable personalities in our galactic family. From renowned astrophysicist and Australia’s first Women in STEM Ambassador Lisa Harvey-Smith, the book guides you through the most extreme and confounding members of the Galaxy’s vast, varied and really quite weird stellar brood.

In this extract from the book, Lisa delves into the strange and fascinating existence of dwarf stars.

Stars appear in a vast range of sizes, with most being smaller and cooler than the Sun. The smallest burn their hydrogen more slowly and therefore have much lower temperatures. You can tell a lot about a star from its colour. Hotter stars give off more blue light, and cooler stars tend to the red. It’s similar to how hot gas-cooking flames are blue, whereas cooler candle flames are red. Counterintuitive, huh?

By looking in great detail at the colours of stars, we can tell precisely how hot they are, what chemicals they contain, and how old they are. We can even predict their future as they go through the ageing process.

Before we go on, I should fess up that the names of star categories make no logical sense whatsoever. From the coolest to the hottest stars we call them M, K, G, F, A, B and O, with numbered subcategories from 0 to 9. Uh-huh …

There are also subcategories for luminosity (how much light a star puts out) from 0 through to VII, in Roman numerals, just to be fancy.

At this point I’d like to apologise on behalf of astronomers everywhere for this ridiculous situation – astronomy is littered with strange historical naming schemes. But there we have it.

Our Sun is a G2V star, somewhere in the middle of the jumbled alphabet soup of stars. B and O stars, at the top end of the scale, are humongous, gluttonous giants that explode in a shower of sparks when they come to the end of their life. In contrast, M and K stars are cool and steady types who live long and interesting lives. From now on, we will call these M and K stars ‘red dwarfs’.

Red dwarfs have only about a tenth to one half the mass of the Sun, and are only half as hot. They are smaller in physical size, too, and decidedly dimmer (although not lacking in intelligence). These stars are capable of great feats of physics – they still burn hydrogen into helium to produce vast amounts of energy in their core – but because they are smaller, there are far fewer nuclear reactions and their output is decidedly more puny.

Red dwarfs are the most common type of star in the Milky Way, with the faintest M-dwarfs making up more than 70 per cent of stars in our universe. Despite that, we never see them. I mean that literally. We don’t see any of them. At all. Ever. We didn’t even know that red dwarfs existed before the invention of the telescope, because they are too faint to see with the naked eye. Imagine that! Every star you can see is part of the 30 per cent minority.

As slow burners, these stars live extremely long and varied lives. Not only does their reduced rate of nuclear fusion extend their life, but also their enhanced internal mixing causes fresh hydrogen fuel from the outskirts of the star to be transported to the engine in the middle. As such, we predict that red dwarfs can live in excess of a trillion years.

As adolescents they can be active and sparky. In this gregarious stage of their lives they are often characterised as ‘flare’ stars. Rather than being a regrettable 1970s fashion statement, this moniker actually describes a stage of intense variability in the life of lower-mass stars where they quickly erupt – explode, even – for a few minutes before relaxing back to their regular demeanour as if nothing had happened. Flares from young red dwarfs are 100 to 1000 times more energetic than when the stars are older. As red dwarfs age, they cease this nonsense and increasingly potter their way through life, with age slowly ripening and changing their character.

Stars of all sizes form when gravity pulls together materials in interstellar clouds of gas. Red dwarfs are the littlest stars, just slightly larger than Jupiter, and are the smallest member in the official category of stars. But there are also some almost-rans, plucky hopefuls who tried but just missed the cut-off for full stardom. These battlers, called brown dwarfs, live out quite different lives to other stars.

With core temperatures of below 3 million degrees Celsius, brown dwarfs are simply not big or hot enough to turn hydrogen into helium via nuclear fusion. They can, however, manage other nuclear fusion reactions involving chemicals called deuterium and lithium. These reactions don’t generate as much heat as hydrogen fusion, so the surface temperatures of brown dwarfs are generally below 800 degrees. They emit almost no visible light: if you looked at one close up, you might just see a dim purple-ish glow.

Brown dwarfs weren’t discovered until 1995, because the only way to find them is to use infra-red detectors. Once astronomers built a telescope powerful enough to see them, we could finally make out their slight warmth in the icy cold of space.

The Secret Life of Stars is out now. Text by Lisa-Harvey Smith, illustrations by Eirian Chapman and cover design by Philip Campbell Design.