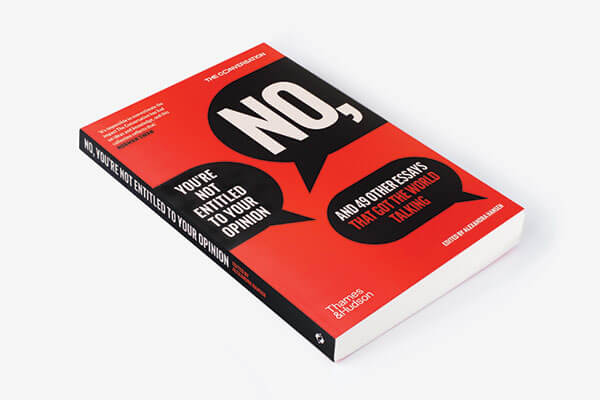 No, You’re Not Entitled to Your Opinion is the ten-year anniversary collection of essays that put The Conversation on the map. Together, these fascinating essays chart the course of the world over the past decade.

In the extract below, Post-doctoral Fellow Rachael Dunlop discusses and dissects six common myths about vaccination.

Recently released government figures show levels of childhood vaccination have fallen to dangerously low levels in some areas of Australia, resulting in some corners of the media claiming reignition of ‘the vaccine debate’.

Well, scientifically, there’s no debate. In combination with clean water and sanitation, vaccines are one of the most effective public health measures ever introduced, saving millions of lives every year.

Those who claim there is a ‘debate’ will cite a series of canards designed to scare people away from vaccinating, but if you’re not familiar with their claims, you could easily be convinced by anti-vaccine rhetoric.

What is true and what is not? Let’s address just a few of the common vaccine myths and explain why they’re wrong.

The myth that vaccines are somehow linked to autism is an unsinkable rubber duck. Initiated in 1998 following the publication of the now notorious Lancet paper, (not-a-Dr) Andrew Wakefield was the first to suggest that the measles mumps rubella (MMR) vaccine might be linked to autism.

What he didn’t reveal was that he had multiple conflicts of interest, including that he was being paid by lawyers assembling a class action against the manufacturers of MMR, and that he himself had submitted an application for a patent for a single measles vaccine.

It eventually unravelled for Wakefield when the paper was retracted in 2010. He was struck from the medical register for behaviour classified as ‘dishonest, unethical and callous’ and the British Medical Journal accused him of deliberate fraud.

But once the idea was floated, scientists were compelled to investigate, particularly when it stood to impact public health so dramatically. One of the most powerful pieces of evidence to show there is no link between vaccines and autism comes from Japan, where the MMR was replaced with single vaccines mid-1993. (See ‘Japanese study is more evidence that MMR does not cause autism’ by Andrew Cole.) Guess what happened? Autism continued to rise.

After this door closed, anti-vaxxers shifted the blame to thiomersal, a mercury-containing component (not be confused with the scary type that accumulates in the body). Small amounts of thiomersal were used as a preservative in some vaccines, but this never included MMR.

Thiomersal, or ethyl-mercury, was removed from all scheduled childhood vaccines in 2000, so if it were contributing to rising cases of autism, you would expect a dramatic drop following its removal. Instead, like with the MMR in Japan, the opposite happened, and autism continues to rise.

Yet, the myth persists and probably for several reasons, one being that the time of diagnosis for autism coincides with kids receiving several vaccinations and, also, we currently don’t know what causes autism. But we do know what doesn’t, and that’s vaccines.

2. Smallpox and polio have disappeared so there’s no need to vaccinate anymore

It’s precisely because of vaccines that diseases such as smallpox have disappeared.

India recently experienced two years without a single case of polio because of a concerted vaccination campaign.

Australia was declared measles-free in 2005 by the World Health Organization (WHO) – before we stopped being so vigilant about vaccinating and outbreaks began to reappear.

The impact of vaccine complacency can be observed in the current measles epidemic in Wales, where there are now over 800 cases and has been one death, and many people presenting are of the age who missed out on MMR vaccination following the Wakefield scare.

3. More vaccinated people get the disease than the unvaccinated

Although this sounds counterintuitive, it’s actually true, but it doesn’t mean that vaccines don’t work, as anti-vaxxers will conflate it. Remember that no vaccine is 100 per cent effective and vaccines are not a forcefield. So, while it’s still possible to get the disease you’ve been vaccinated against, disease severity and duration will be reduced.

With pertussis (whooping cough), for example, severe complications such as pneumonia and encephalitis (brain inflammation) occur almost exclusively in the unvaccinated.

Therefore, since the majority of the population is vaccinated, it follows that most people who get a particular disease will be vaccinated, but, critically, they will suffer fewer complications and long-term effects than those who are completely unprotected.

4. My unvaccinated child should be of no concern to your vaccinated one

Vaccination is not just a personal issue, it’s a community responsibility, largely because of a concept known as ‘community immunity’. This describes a level of vaccination that prevents epidemics or outbreaks from taking hold and spreading.

Some people question the validity of this concept, sometimes referred to as herd immunity, but the impact of it breaking down can be easily observed in places where vaccination levels fall dangerously low – take the current measles outbreak in Wales, for example.

The other important factor about community immunity is it protects those who, for whatever reason, can’t be vaccinated or are not fully vaccinated. This includes very young children, immunocompromised people (such as cancer sufferers) and elderly people.

A cursory search of Google for vaccine ingredients pulls up a mishmash of scary-sounding ingredients that to the uninitiated can sound like ‘franken-science’.

Some of these claims are patently untrue (there is no anti-freeze in vaccines) or are simple scaremongering (regarding the rumour of aborted foetuses, in the 1960s some cells were extracted from a foetus to establish a cell line that is still used in labs today). Some of the claimed chemicals (and, remember, everything is made of chemicals) are present, but are at such low levels as to never reach toxicity. The simple thing to remember is the poison is in the dose – in high enough doses, even water can kill you. And there’s fifty times more formaldehyde in a pear than in a vaccine.

Also, if you ever read the claim that ‘vaccines are injected directly into the blood stream’ (they’re not), be sceptical of any other claims the writer is making.

The concept of ‘too many too soon’ was recently examined in a detailed analysis of the US childhood immunisation schedule by the Institute of Medicine (see The Childhood Immunization Schedule and Safety: Stakeholder Concerns, Scientific Evidence, and Future Studies). Experts specifically looked for evidence that vaccination was linked to ‘autoimmune diseases, asthma, hypersensitivity, seizures, child developmental disorders, learning or developmental disorders, or attention deficit or disruptive disorders’, including autism. The researchers confirmed the childhood vaccination schedule was safe.

The number of immune challenges (between 2000 to 6000) that children fight every day in the environment is significantly greater than the number of antigens or reactive particles in all their vaccinations combined (about 150 for the entire vaccination schedule).

The next time you hear these myths about vaccination, you’ll hopefully have some evidence up your sleeve to debunk them.

This is an extract from No, You’re Not Entitled to Your Opinion, edited by Alexandra Hansen and available now. Text by Rachael Dunlop, Post-doctoral Fellow at the University of Technology Sydney. Originally published on 26 April 2013.