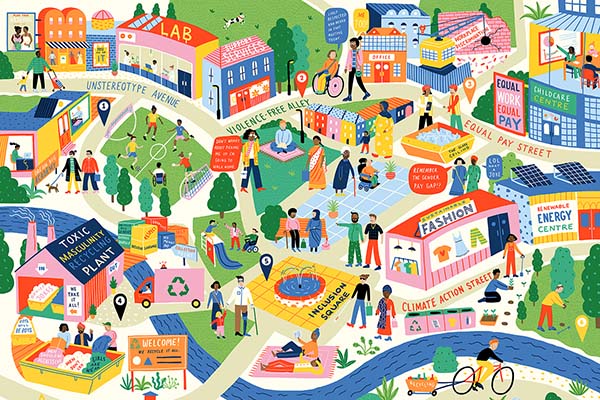 In support of UN Women Australia, Ruby Taylor welcomes you to Equiterra: a society where all people have equal rights and opportunity, regardless of their gender. A community where the glass ceiling is smashed, the gender pay gap is a thing of the past and toxic masculinity goes straight into the recycling.

We’re thrilled to have paired up with Ruby Taylor and UN Women Australia to turn this uplifting artwork into a 1000-piece puzzle.

So, how far from reality is Equiterra from Australia in 2022? We looked at five of the places featured in Ruby Taylor’s utopia and compared them with the facts. Unfortunately, the figures show we have a long way to go before we reach gender equality.

Across Australia, the freedom to access safe and affordable healthcare varies drastically from place to place. For example, abortion has been decriminalised in the state of Victoria, but accessing abortions is still difficult for many women, especially for migrant women and women living in regional areas. This shows that for many Australian women, freedom of choice largely depends on where you live. Many trans and gender diverse people also experience additonal barriers to accessing safe healthcare, including disrespectful attitudes and misgendering by medical professionals.

In Equiterra, women feel safe walking down the street, no matter what time of day or night it is. Women are free to walk home alone at night without clutching their keys between their fingers or texting their friends to confirm they’ve arrived home without incident.

Women, men and nonbinary people in Equiterra enjoy equal relationships, free from violence or coercion. On the home front, women and children feel safe in their homes and enjoy the same security as their male family members. Domestic violence is a rare occurrence here, because there are strong laws against it and services to support victims. Since gender equality is the norm in Equiterra, the power dynamics between intimate partners are not oppressive or toxic.

Violence against women is a serious and widespread problem in Australia. Recorded crimes data shows that women are five times more likely to be victims of sexual assault than men. Similarly data collected by Our Watch shows that one in three women has experienced physical and/or sexual violence perpetrated by a man they know, while one in four women has experienced physical or sexual violence by a current or former intimate partner since age fifteen. On average, one woman a week is murdered in Australia by her current or former partner, and almost ten women a day are hospitalised for assault injuries perpetrated by a spouse or domestic partner.

In Equiterra, men and women are equally represented in public life, including in the political sphere, corporate boardrooms and in the media. Women have equal say in decisions that affect their lives, their bodies, their policies, and their environment.

The reality looks starkly different in Australia. In the business world, data from the ABS indicates that managers are almost twice as likely to be men than women. Similarly, only seventeen per cent of CEO positions in the non-public sector were occupied by women in the period from 2018 to 2019.

On a more positive note, in the period from 2019 to 2022, for the first time, there was equal representation between men and women parliamentarians in the Senate. However, women still comprise only three in ten federal parliamentarians in the House of Representatives. And despite the improvements in the Senate, female politicians and political staffers have reported a toxic and sexist culture in Parliament House, leading many to leave their jobs.

Children in Equiterra grow up without the negative influence of restrictive and harmful stereotypes around gender roles. Men and women share chores and care duties at home equally, and domestic labour such as caregiving is valued as equally as participation in the paid workforce. In Equiterra, diversity is celebrated, not feared, and a culture of acceptance dominates peoples’ hearts and minds.

Archaic beliefs around gender roles mean that women in Australia do far more domestic labour and caring for children than men. For every hour an Australian man spends on unpaid care work, an Australian woman spends one hour and 48 minutes, according to the Workplace Gender Equality Agency. Similarly, within opposite-sex couples, nearly half of all household tasks are always or usually done by the female in the relationship, compared to only ten per cent done by the male. This grows even more unequal after couples have children.

The heavy load women carry at home often causes them to miss out on promotions at work, or to actively avoid seeking them for fear they will not be able to juggle their responsibilities. This translates into economic inequality between men and women, particularly in retirement.

In this utopia, not only do all people receive equal work for equal pay, but the gender pay gap across industries no longer exists. With care work and household responsibilities shared equally, and paid parental leave equally accessible to all,  women are not penalised for taking time out of the paid workforce to care for children. The minimum wage here provides a decent standard of living and there is quality and affordable healthcare for those who need it.

In Australia, it has been a legal requirement since 1969 that women and men be paid the same amount for performing the same role. Despite this, there’s still a persistent gender pay gap across industries, with women’s full time adult average weekly earnings being only eighty-six per cent of that of men. This represents a gender pay gap of fourteen per cent. As a result of lower wages and more unpaid caregiving responsibilities, women retire with a superannuation balance on average forty-seven per cent lower than men.

In 2021, the Global Gender Gap Index placed Australia at number 50 – this represented a decline of five places from the previous year, meaning we are actually going BACKWARDS on this issue. This is likely in part due to the unequal impact of the COVID-19 pandemic, which has seen women leaving the workforce at a higher rate than men. Even among those who retained paid work, women took on more duties in childcare, housework and elder care, increasing the ‘double shift’ of paid and unpaid work.

Outdated and sexist values have been ditched.  Archaic notions like ‘men don’t cry’ and ‘boys will be boys’ are recycled into inclusive language and respect. Boys are encouraged to express their emotions and are allowed to be vulnerable. Freed from oppressive gender roles, the residents of Equiterra are not held back by dominant forms of masculinity, and they are happier and mentally healthier than people in any other society.

Outdated stereotypes about masculinity are often rigid and harmful to men in Australia. Men are often encouraged by society to appear dominant, aggressive and to repress their emotions. These rigid stereotypes are often difficult for many men to live up to and can prevent them from living fulfilling lives. Men who subscribe to these dominant norms are more likely to engage in risk-taking behaviours, such as dangerous driving and substance abuse, and are less likely to seek help or to talk about their feelings. They also experience greater health risks, including higher rates of depression and suicide

This article was inspired by UN Women Australia’s Welcome to Equiterra.