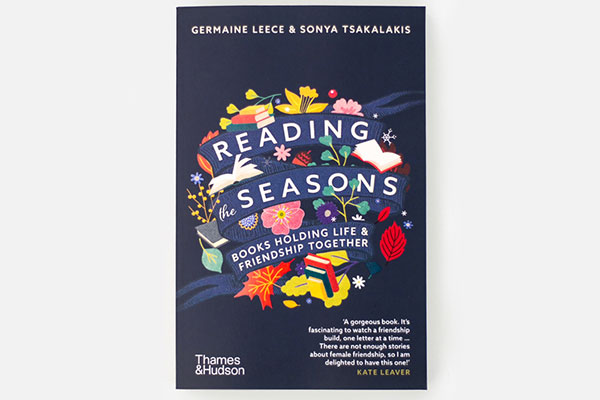 Reading the Seasons is a book for our times, showing how literature connects us to ourselves and others. Get of taste of the genuine friendship between the authors, Germaine Leece and Sonya Tsakalakis in this extract from the book.

That trembles in the moon’s pale ray;

Its hold is frail – its date is brief,

Restless, – and soon to pass away!

Here are a few lines that I read today. I like to start the day with glittering language and thoughts. And I read them aloud, much to my children’s chagrin. One day they’ll look back fondly?!

Such beautiful lines, thank you. I must say, our friendship has given me much more understanding about the power and importance of poetry in daily life. It also reminds me of an eighty-something male bibliotherapy client I saw last week. You would have loved him.

His father recited poetry to him throughout his childhood, and in the past couple of years he decided he wasn’t reading enough poetry so he started a group. Wine and cheese accompany the monthly poetic conversation on the beach. He was such a character, saw the books on his bookshelves as his lifelong friends and used words such as ‘charm-struck’. I didn’t want the session to end, I was so charm-struck myself.

While talking about his ‘friends on the bookshelf ’, he reflected that he hadn’t read enough female authors in his lifetime and wanted to rectify that. (I imagine you are swooning now!) I decided to give him a prescription filled with female authors that illuminated his different chapters to help give a fuller shape to his own story. I couldn’t resist starting with Jeanette Winterson’s memoir Why Be Happy when You Could Be Normal?, as we have discussed before, required reading for any book lover! He told me that as a teen he put his trust into books rather than people to make sense of the world, and that brought to my mind Winterson writing about ‘[falling] into books … I put myself inside them for safe keeping’. While my client and Jeanette have nothing else in common about their families or their lives, I hope the image of two teenagers on different sides of the world in different decades finding comfort and anchoring inside the pages of books creates a nostalgic reading experience for him.

I ended with a bit of fun. He is a fan of Wodehouse, so I thought I would aim for a similar era and comedy-of-manners style … I chose EM Delafield’s Diary of a Provincial Lady, as she always makes me laugh and I love the sharp, observational gaze she puts on the upper class living in Devonshire between the wars. I think I read somewhere that it was semi-autobiographical and that she wrote the diaries as a ‘gentle joke’, but at the same time she manages to shine a feminist light on the domestic sphere of English country life. Her husband is always reading the Times newspaper and going to sleep, and she spends much of her time ‘sacrificing truth to demands of civilisation’! I’m not sure he will relate as well to Delafield’s character who, when she feels ‘that life is wholly unendurable’ decides ‘madly to get a new hat’, but I hope he will savour the wit and irony of the writing.

He reminded me how much I enjoy sessions with older clients who choose to use the time to reflect on their reading lives and map how it has changed over the decades. There’s something about witnessing someone’s backstory that creates the same wonder within me as words between covers. I remember another client who, in her seventies, told me our session had helped her understand that by recollecting the different books she had read throughout her life, she could trace her evolution of self. She added that having this quiet time and being asked questions about the ways reading had affected her life had allowed this realisation to occur. I found that particularly powerful. The importance of time to reflect. How do you enjoy working with older clients?

I had better leave it here, as your autumn poem reminds me, the day is soon to pass away and dinner needs preparing.

I have to tell you, I read that letter a few times. Not just because I was thrilled by ‘charm-struck’, but also to bask in a cascade of my reflections on working with older clients. In an oblique way. My bibliotherapy career began in aged care, where I ran communal reading circles. Within these milieus, poems and short stories were read aloud, creating a container for the sharing of reflections, memories and personal stories evoked by the words on the page. A fifteen-minute short story can be stretched out to an hour. On one occasion, we were reading Gogol’s eccentric gem, ‘The Nose’.

Actually, it’s positively absurd! How else would you describe a story where the protagonist finds his nose in a loaf of bread that later parades haughtily on the streets of St Petersburg? And to make matters more intriguing, it features a snuffbox. Suddenly, the normally reticent Edna recalled her child-hood fascination for her grandmother’s rosewood snuffbox, which sat on the mantelpiece. And from there she launched into vivid memories of her grandmother, concluding at the end that she had completely forgotten about that snuffbox, ‘hadn’t thought about it for decades’. That is what I love about reading aloud, the vivifying of the text. The original story or poem serves as a launching pad for other stories, contained within, awaiting to be heard and enjoyed. Aspects of the self embedded deep within seem to be awakened. Especially wonderful are older folks’ stories, an homage to Judith Wright – again!

Seventy years of stories he clutches round his bones.

Seventy years are hived in him like old honey … [2]

Stories are as precious and coveted as old honey. During that session there was a lot of animated banter about childhood fascinations … places, things, that held a special allure which would probably be overlooked by the eyes of a grown-up. Wishing to continue on that theme, I chose the unique persiflage of Saki’s The Lumber Room for the following week. It’s a hilarious story about a mischievous little boy who, with inventive flair, gets into the room from which he is banned by his austere aunt, and finds it filled with wondrous curiosities. You can’t help but come away thinking that whatever punishment, which no doubt will be dished out to him afterwards, would be worth it. Absolutely worth it! Suddenly there were recollections of places where kids were forbidden because it was the ‘good room’.

And even more interestingly, the places where children were allowed; spending hours outside till you were called in for dinner, being part of the ‘street tribe’ or roaming to nearby paddocks and creeks. One reader who grew up on a farm lovingly recalled waking up at six every morning to milk the cows, and riding her pony to school with her siblings. And refashioning the silk saved from the parachutes used in the war to make bloomers. I know – there is upcycling for you! She believed she had a beautiful childhood, there were always people around, places to discover.

So, when you talked of the importance of time to reflect when older, it also gives those of subsequent generations a space to revel in stories of times past. A type of validation for a life lived that may otherwise be forgotten. S x

[2] ‘Judith Wright extract from ‘South of My Days’, in Collected Poems (Sydney: HarperCollins, 1994)

This is an extract from Reading the Seasons: Books Holding Life & Friendship Together, available now. Text by Germaine Leece and Sonya Tsakalakis and cover design by Nada Backovic.